Facebook: JK Kato-Studying the Human Quest for Depth and Transcendence 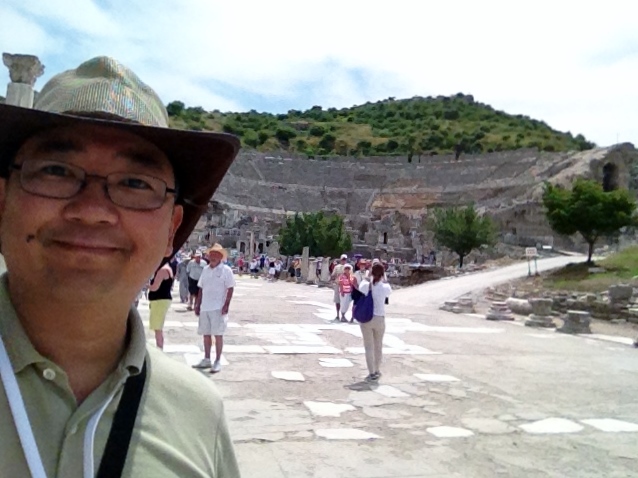 (in front of the remains of the Roman Theatre in ancient Ephesus, Turkey)

At present, I have two dominant academic passions: (1) the study of Jesus and how he has been experienced and interpreted beginning from early Christianity and down through the centuries, and (2) the study of our contemporary context of globalization in which different cultural and religious worlds encounter and mix (I refer to this as “hybridity”) and what that situation may mean for the future.

In my 2012 book How Immigrant Christians Living in Mixed Cultures Interpret Their Religion: Asian-American Diasporic Hybridity and Its Implications for Hermeneutics (originally, my Ph.D. dissertation), I described how the experience of being simultaneously situated in different worlds (hybridity) influences how one interprets one’s religious traditions. There, I also expressed the conviction that such hybridity, which is becoming increasingly common in a globalized world, is actually an important key in making religions less toxic and exclusionary and more inclusive and committed to peace as envisioned by Jesus.

Since coming to King’s in 2007, I have applied these insights more specifically to the study of the New Testament and to various other theological themes. These efforts have borne fruit in my recent book entitled Religious Language and Asian American Hybridity (New York: Palgrave Macmillan, 2016).

“In What Way Are We the Chosen People? Rethinking Christian Election in the Aftermath ofDominus Iesus.” The Japan Mission Journal. Spring 2002, pp. 26-36.

“The Delay in the Parousia, the Historical Jesus and the Lucan Corpus,” in Memory and Solidarity: Eschatological and Historical Theology. Ed. by Tsutomu Sakuma. Tokyo: San Paolo, 2002, pp. 73-107.

“Why the Quest for the Historical Jesus is Necessary.” Catholic Studies No. 69. Ed. by the Theological Society of Sophia University. Tokyo, August 2000, pp. 1-27.